AIDS/Lifecycle – How It All Started

Then I Was Hooked…

This story starts the same as most: long, long ago, in a land far, far away… Well, it was West Hollywood in 2002, so maybe not so long and far. My first boyfriend took me on that exodus every gay man takes at some point: their first trip to the local gay Mecca . For me, this was West Hollywood in all its glory. Unknown to either of us, this was the very same weekend that the first AIDS/Lifecycle would be rolling in. 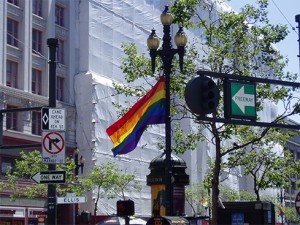 As we drove down Santa Monica we were confronted with road closures. Being curious and interested we parked and waited, to be rewarded with over 1000 cyclists rolling in on their bicycles to television cameras and a cheering crowd. The banners gave the story away: a single ribbon with the word “LAIDSF” below it. As I watched the cyclists ride in, I quickly realized this meant LA – AIDS – SF, or San Francisco to Los Angeles for AIDS, bringing me to tears. My boyfriend couldn’t comprehend why I would be so emotional over some silly event, which is probably one of the reasons we didn’t last long.

It took two more years for me to hear of the event again, this time a friend training to ride in ALC 3. I didn’t have the time to fundraise or train for it, but I vowed to be ready in time for ALC 4. So train I did, and talk to everyone about it I did too. I was put in touch with a friend of a friend, a fellow cyclist named Randy , and together we slowly brought our cycling mileage up from my meager 4 miles at a time to 15 mile stints together and later to 100 miles in a day. In October of 2004 we registered together for ALC 4, giving us just shy of 8 months to train for 585 miles in a 7 day period!

Train we did. Randy pushed me harder, longer and up more hills then I would have if I had trained alone. We quickly built up our ride distance, finally joining up with the Riverside Bicycle Club and meeting the third of our party, Ray. Ray is a long time cyclist and loved the idea of the ALC challenge, so even though it was late it the training game, he joined up and trained with us. We all knew we were ready when we were able to complete the 2-day 200 mile Santa Barbra Ride put on by Shifting Gears. 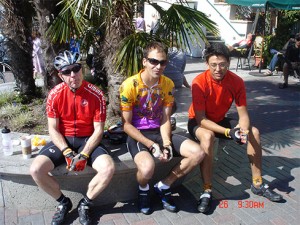 Did I fail to mention I told everyone about the ride? Not only did I tell everyone about it again and again, even if they were tired of hearing, I also asked, begged, and haggled for any donation I could get. The only requirements of the ride are: bring a bicycle, a helmet, a trained body, and the $2,500 dollar minimum donation. I received donations as small as just one dollar all the way up to hundreds of dollars. Once, a complete stranger upon seeing my donation bracelet, gave me all the cash in his pocket minus a couple of dollars to get home, in exchange I collected his address for a thank you letter and gave him my bracelet (thanks again James!). I did manage to raise all I needed, even if just barely, as the last of my donations came in the day before I left for San Francisco.

AIDS/Lifecycle 4 was an incredible event. Cycling 585 miles over 7 days brings so many memories back to me: Riding out of the Cow Palace with 1,400 other cyclists all going on this wild journey with me, the positive community I was constantly surrounded by, or the flood of emotion as I passed supporters holding signs saying “thank you for doing this for my brother”. These memories plus more make me want to participate in the ride again and again until there is no need for me to raise the money any more, until AIDS is a thing of the past.