AIDS/LifeCycle 5
(not only a bicycle journey, but also a life journey) 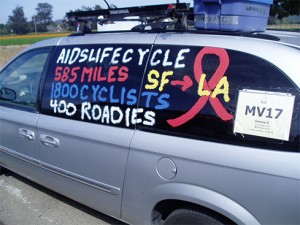 The AIDS/LifeCycle was once again an amazing adventure. This year I decided to go as a roadie, and managed to land in the team of my first choice: the sweep team. My fellow sweepers were all awesome people, not soon to be forgotten. Everyone had a wonderfully themed vehicle, ours being Scooby Doo’s “The Mystery Machine”.

Riding a bicycle from San Francisco to Los Angeles over seven days is no easy task, but as I learned last year, with a great support crew and lots of training, it is completely possible. This year, I learned that the support crews, driving up and down the route offering help to stranded cyclists, have just as hard of a job. They are putting in 10 hour days behind the wheel, driving nearly 1000 miles as they loop the route over and over again, averaging speeds of around 20 miles an hour as locals fly by with the horn blaring.

Being sweep gave a real behind the scenes experience for me. As a rider, all you have to focus on is keeping your body and mind fueled and in shape to get from stop to stop and camp to camp. As sweep, I found that I was a driver, designer, mechanic, medic, counselor, cheerleader, food server and even egg layer. As a roadie, the job doesn’t end when the shift is over or when the assignment is done. With 2200 people around, there is always something that needs to be done or some team that needs help. One team captain, after working in logistics and support all day, would spend his night’s severing food in the kitchen tent. Another captain and crew didn’t have a job for the day, so ended up helping four other crews instead. 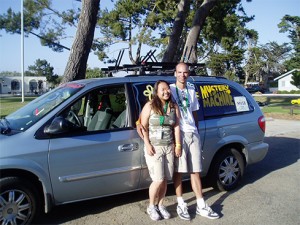 One of the greatest parts about being on the Sweep Team is the people I got to meet. My number one of course is Jennie, my sweep partner. We hit it off so well, it’s just scary, and now she is defiantly in my small group of best friends. If she registers as a roadie for next year, then we are going to try to get on the sweep team together again.

In the BunnyLove sweep van, was Ken and Midori. If the cyclists thought Jennie and I were married/partners, they defiantly thought that of Team BunnyLove, as they wrote Ken + Midori on the back window… plus, it’s Team BunnyLove, I mean, come on.

Ken is a wonderful straight guy who has been supporting the ride for years, either as a rider or as part of the sweep team. I loved the chances we had to talk and eat together, and I am going to miss my 6 am wake up call when he would knock on my van window. 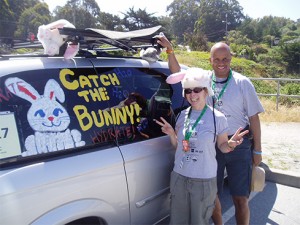 Midori. One name. World renowned. Haven’t heard of her? Honestly, I had not either until I joined the sweep roadie team. She really is world famous, in specialized communities. She has a degree in psychology and her fourth book will be published in a month. She was a thrill to work with and always knows how to make a group of people smile and laugh. Before, during and after her shift as a sweeper, she also helped media relations by blogging during the ride and interviewing other roadies and riders. She managed to corner myself and some of my fellow sweepers for an interview of “why we are here”. You can see this one and more at her ALC page . Direct link to her interview of us can be found here: Post 2 – 2:49pm .

(Audio File is Copyrighted by Midori and/or FHP Inc.)

Picking stranded riders up and driving them to the next rest stop was a great chance to meet them and get to know them. Every one was unique and had a great story to tell as to why they were there or how their ride had gone so far.

Tony is on the top of my mind as I just finished reading his blog about how we picked him up. Jennie and I had just gotten in the back of a very long line on Day 2 for fried artichoke hearts, or fried avocados, as I commonly call miss name them. ALC communications called me asking my location and told me that I was the closest empty sweep vehicle to respond to a lost rider. A quick trip down the 1 freeway put us in Monterey, and we quickly found Tony standing on the corner with his bicycle embarrassed but smiling. We drove him back to the nearest stop, lunch, and dropped him off, quickly grabbing lunch ourselves and getting back on the road. His detour, plus having to re-ride the miles out of lunch added about 15 miles for his day making for a 120 mile day. 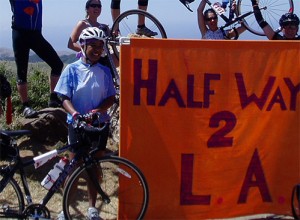 Linda is a very nice young looking lady from back east. She is a 6th grade school teacher, and always had a smile for us. She had clip problems on day 1 or 2, and we got her to the bike mechanics. After that, we would see her almost daily, fortunately though, never with her being inside our sweep van. We were even graced with her smile and good humor during lunch on the last day.

I am awful with names, and I swear to myself that next year I am going to have a note book with me to take notes and do daily voice or written blogs. I have so many stories of so many other picked up riders, but which story goes with which face, and who’s name is who’s makes it almost impossible to tell them properly.

Randy B., Jennie’s boyfriend, was also a cyclist on the ride. One morning as I left camp to pick Jennie up from her hotel, he rode by and hollered a hello to me. I was kind of in a tired reclusive mood, but seeing him reminded me how Jennie said that he sings “the bicycle song” every morning. So I grabbed the Altoids can and played “Bicycle Race” by Queen. I then rolled all the windows down and cranked the stereo. At least one in every three riders that passed me as I waited in traffic started either nodding their head to the music or started singing along. I call this the Pay It Forward principle: Randy saying hello therefore bringing me out of my mood, I paid it forward by getting a great cycling song suck in the heads of at least a dozen riders as they left camp for the day.

I can’t even begin to touch on the emotional stories that surround the ride each year. It is something that is hard to write about and hard to talk about; it can only be truly experienced by participating on the ride itself. I have been a lucky one, I have yet to bury a friend due to AIDS, and know only a few people who have HIV/AIDS. That’s why I participate and am focusing more and more of my life to this bicycle ride. I focus because it is not just a simple bike ride, it is 2500 people working for one cause: to end AIDS. As the AIDS epidemic enters its 25th year, the AIDS/Lifecycle themed this year’s ride “Not Another 25 Years”. I can only pray that in another 25 years I will still be able to say that I have yet to lose a loved one to AIDS.